“We are Doom band, but we don’t try to be “loudest” or “heaviest” band as many other Doom bands do. Our music is much more atmospheric and there are a lot of tranquil moments”

When I first had a listen to “Dense Fog”, I realized the Funeral Moth’s debut album deserved a vinyl issue no matter what. And here it is finally! This is a band taking things meticulously, they don’t care about external pressure or urgencies. Therefore the music they play is very slow and thoroughly solemn. It’s something rooted in ancient Japanese tradition. It’s carefully ritualistic.
2015 is a very important year for Funeral Moth; besides “Dense Fog” vinyl release, they’ve also (finally) seen their s/t debut EP (dating back from 2008) being released on vinyl too, as well as a change in their line-up and the announcement of a brand new EP recording scheduled for this summer.
Let’s go depth into this dense fog…

“Dense fog album is featuring 4 songs we had written from 2007 to 2010. When we wrote these songs, there weren’t any certain concepts. There were just 4 individual songs. To be frank with you, the album title hadn’t been fixed until we finished the recording. We eventually took the album title from the title of the short instrumental song “Noumu – dense fog”. When we heard all songs after we finished the mix, we thought this title really represented our music, so we chose this for our album title”.
When questioned about the outstanding Justin Hartwig’s solo collaboration we can hear on the album’s opening song; “Just a month or so before we started the recording, personally I went to Adelaide/Australia to see Mournful Congregation’s gig. I talked with Justin there and told him we would start the recording after I came back to Japan. While we were drinking after the show, he offered to play a solo for us. There were no reasons to deny it!!!! He recorded his solo with Damon of Mournful Congregation at his The Cave studio. Then I got his solo track via internet and mixed it with other parts. Anyway, it was really great to collaborate with them because I’m a big fan of MC since mid 90’s!!!”
Yet Funeral Moth is not a typical Funeral Doom band: “We are doom band, but we don’t try to be “loudest” or “heaviest” band as many other doom bands do. Our music is much more atmospheric and there are a lot of tranquil moments. I think the listener will feel like walking in dense fog when he/she listens to this album!”
This out of cliché attitude shows also in the vinyl release: “The vinyl version is really terrific!! Especially, color vinyl edition is really great. We tried to avoid typical black and white artwork, this color vinyl is really suitable for the artwork. Thanks for the great works!” 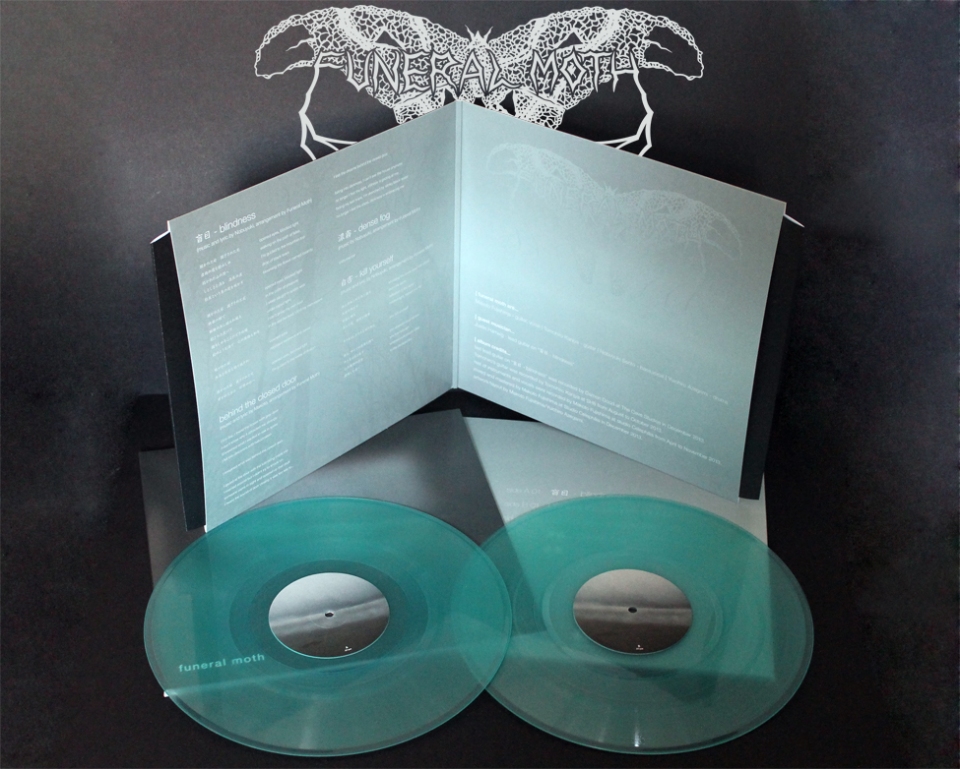 When you’re used to bands releasing a full length almost every year with several split 7″s in the middle, it feels almost weird to spend years in the making of an album and even weirder to announce a brand new recording EP shortly after that album is out… “At first, these songs were meant to be for a single guitar. In 2010, we toured with Mournful Congregation in Japan. During that tour, Matsubara-san from Gridlink played with us as a special guest. All shows with him were really great and we decided to add one more guitar player as a permanent member after that. Unfortunately, he lives in the town far from our home town. So we couldn’t ask him to join. In 2012, Mayo joined and we started to arrange all 4 songs for 2 guitars. It took a year or so to finish re-arrangements, and we started the recording in Spring 2013. Soon after, Mayo left the band and he was replaced by Tomohiro. These are the reasons for the delay.
We’ve already had 2 new songs and will record them soon. Dense Fog album was different from our 1st EP released in 2008. Next EP will be also different from both stuffs. I think they are much more complex than old materials. One of them is written in rondo form, which we’ve already played in live many times. The other is more “metal” song and I think audiences can bang their head with it even if the tempo is slow as hell! Compared to our old songs, there are a lot of harmonies. We’ve already have the title for the EP but it’s too early to reveal it”.

Another aspect which caught my attention when I first listened to Funeral Moth was the whole language thing: “We use both Japanese and English. Adding to them, our ex-bass player sang in French too. Both I and he like Worship and tried to use multiple languages for our lyrics like them. Mainly, he sang in Japanese because his deep voice is much more suitable for Japanese lyrics. Currently, I took all vocal duties and still use both English and Japanese. Unfortunately I can’t speak French apart from “je t’aime” or “Bonjour”! If I have enough time, I want to learn another language to add variation in our lyrics. But before that, I must polish my English and Japanese!”

As pointed out above, Funeral Moth are about to arrange a brand new recording which will feature their brand new bass player. I asked the band to introduce themselves: “We have a new bass player now, whose name is Ryo Amamiya. He’s very young and talented bass player. He told me that he saw our show at the tour with Mournful Congregation, and he was just 18 at that time! In Japan, it’s rare to find out such a young people who is into extreme doom music like we are playing! He played in some bands before joining us, but this is the first time to play in a doom band apart from cover band. For more details, he’ll introduce himself, come on Ryo!
Ryo – I’m truly honored to be a part of Funeral Moth. I’ve got some big shoes to fill as former bassist Nobuyuki was the original member since 2005, and had been writing songs until the very departure. I am hoping to bring a new breeze of air into the band, but also keeping the core concept. But as for now, I’d have to get used to the feeling of the slow tempo; these songs are surly hard to play!!” 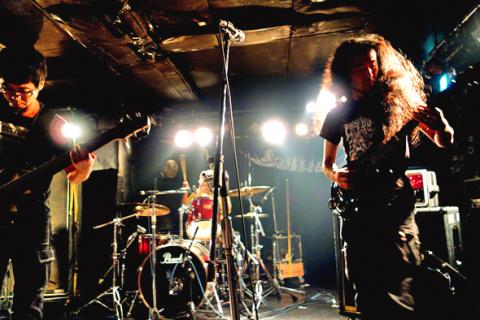